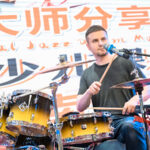 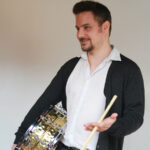 Anthony Vanacore is a New York City native born musician who has performed around the world and is currently one of the most active and sought after drummers in China where he currently resides.

In Beijing he is the leader of his own experimental improvisational project “Core” and China’s only band dedicated to researching and performing music from the bebop era of jazz “BeiBe” (Beijing Bebop). In addition, he performs regularly with the finest musicians in Beijing and greater China, constantly crossing many genres and idioms.

Anthony is a very active clinician and educator in China, holding a teaching position at the Contemporary Music Academy in Beijing, and taking part in dozens of clinics and drum events around China every year. He has shared the stage with many world-class drummers from around the world including Billy Cobham, Dave Weckl, Thomas Lang, Tommy Igoe and many more. Because of his fluency in Chinese, Anthony is often called upon to translate for many great artists who come to China to give clinics including John Riley, Dennis Chambers, Mark Guiliana, Dave Weckl etc.

Anthony received his bachelor’s degree in music performance with a concentration on percussion from Montclair State University in 2007, and master’s degree in jazz performance with a concentration on drum set from the City University of New York Queens College in 2010. He is a proud endorser of Sabian cymbals, Remo drum heads and Vater sticks. Anthony is proud to have been a student of many fine teachers and mentors among them Gene Jackson, Michael Lipsey, Billy Hart, Steve Johns, Sam Ulano, Glenn Weber, Noel Sagerman and many other wonderful people who have helped him along his way.