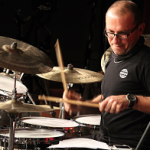 Bulent started his music studies at the age of seven. He played and studied mandolin and guitar at his primary school and joined the school choir. He started to play drums at high school. He played with the school band until his graduation.

At age of 19, he started to play with local bands. A year after he was very busy with local gigs. He played with the bands Dilenci, Jack Daniels, Balkan Trio, Pandora at popular clubs in Istanbul.

He joined the famous rock band Acil Servis in 1996 and performed live in clubs and toured for three years until 1999.

In 1999, he joined to the one of most popular band from Turkey, Ayna. He recorded for five albums with Ayna and toured in Turkey, Europe and USA. Performed more than 700 concerts with Ayna in four years. He quit the band in 2002.

He started to play with popular band Circus in 2002. Played with Circus for 9 nears at local clubs, private parties and touring for cities in Turkey. And quit the band in May 2011.

Bulent is the very well known drum instructor. He is one of the founder&owner of famous drum school drum Club (1997). He has studied with more than thousands of students.