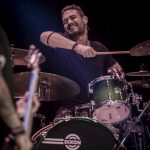 Hakan Ünalan was born on May 10, 1982 in İzmir, Turkey. At the age of 17 he started playing drums and quickly formed a local band with his childhood friends. He left İzmir and went to Ankara to study cinema in 2000. Three years without music was depressing and he decided to play drums again.  He met Gökhan Mandır in 2003 and joined his band “Hamam” right after that. He performed cover songs at various rock bars in Ankara with this band. With Gökhan, he wanted to write original songs and formed the band “Pera” in 2008.

Together with the band Hakan Ünalan recorded 3 studio albums and many singles.  He performed at least 400 concerts since their debut album.

His playing style is basicaly affected by rock, thrash metal and nu-metal. He loves being energic and sometimes aggressive on stage.

Hakan Ünalan is currently busy with their 4th studio album recordings and teaching young drummers in Ankara. He is an endorser of Dixon Drums since 2017.