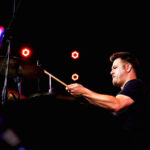 Jason Coffey is a signed artist with Nine Beats, the world’s largest modern music education company, where he performs drum solos, teaches master classes, and judges drum competitions such as the Hit Like a Girl Competition.

In addition to his solo performances, he is actively working with recording artists, including China’s most famous Blues singer, Zhang Ling（张岭）. You can find them performing at renowned venues such as the Blue Note Jazz Club and the Strawberry Music Festival. Jason is currently recording drums for Zhang Ling’s newest album which is set for release soon.

Jason is a founding member of the band “Eluvia”（屹乐队） who have just released their sophomore album, “No Ordinary Love” （非凡之爱）.

His documentary, ”The Making of an Artist: Jason Coffey” is available on Amazon Prime, YouTube and Youku.