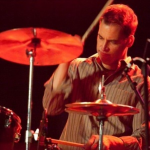 Jeff first fell in love with drums at age 6 and was self taught until age 20 when he received his first formal training from the late Alan Dawson. Inspired by the drum sounds of New Orleans, he took a Bourbon St. playing job which led to meeting and hanging among drum greats such as Raymond Weber, Jeffrey ‘Jellybean’ Alexander, Johnny Vidacovich, Ricky Sebastian and Stanton Moore. He eventually gained recognition within the tight-knit New Orleans drumming community.

He is now well known for his work with Grammy Award Winner blues great Chris Thomas King, Vasti Jackson, New Orleans trombone brass band Bonerama, and many other national artists. He has traveled the world and appeared in many prominent international festivals and in 2012 received the People’s Choice Award for best drummer/drum solo at the Blues and Rock Fest in Phuket, Thailand.

Jeff recently moved to Atlanta and maintains a steady road schedule with Chris Thomas King as well the D.C. Based Bobby Thompson Project, Lefty Williams Band, and Laughlin Country. When not touring, Jeff is an instructor at the internationally acclaimed School of Rock where he teaches drums, keyboards and serves as a show director.

In addition to being an accomplished drum set performer, Jeff holds a Masters in Music Education and has taught at the university and high school level as well as private instruction and drum clinics. Jeff is proud to endorse Dixon Drums, Vic Firth and Stagg Cymbals.