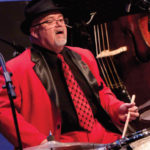 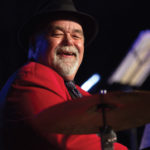 John Morrison has delighted audiences for more than 4 decades with his humor and dedication to sounds that swing! Voted Australia’s best Big Band drummer, his big band “Swing City” was selected to open the Sydney 2000 Olympics and throughout his career John Morrison and his many groups have headlined every major event and festival in Australia.

As the eldest of the Morrison family, John has spent much of his musical life sharing the stage with his younger brother James Morrison. At age 8, John began playing cornet in the school brass band and by the age of 10 had built his first drum set from pots and pans. In these early few years he played many different instruments and styles but jazz drumming was to be his calling.

Further to his busy playing schedule, John is a gifted educator, producer, and patron of many outstanding bands and orchestras. He has mentored literally hundreds of young musicians into successful playing careers and as a record producer engineered some of Australia’s finest award-winning albums.

For over 25 years he has been musical director for the famous Sydney Jazz Camp. John was commissioned by the Australian Federal Government as acting Chairman for the board of the “Contemporary Music Touring Program” advising the Federal Arts Minister on eligible Australian groups to tour regional and remote Australia. John and his wife (singer Jacki Cooper) spend time each year touring disadvantaged schools throughout the Northern Territory inspiring hundreds of kids to get involved in the joys of music. In addition to two successful albums, they also toured China where they performed and recorded with the prestigious Shanghai Symphony.

In 2013 John launched the Big Band Blast in Port Macquarie NSW. The festival is a celebration of the Big Band sound and hundreds of musicians of all ages come to play together. Morrison is an outspoken opponent of competitive playing and TV talent quests so he and Jacki Cooper began this festival to promote the idea that “musicians should play with each other not against each other.” At Big Band Blast in 2014 John presented the worlds’ first Heavy Metal Jazz Orchestra building further on the versatility of the modern big band.

In 2016 John was made a Fellow of the Australian Institute of Music (AIM) and in 2017 was given the title of Ambassador at the Institute. In collaboration with AIM his tenure will include professional development projects for High School band directors from all over Australia. Through AIM John will also provide an opportunity to high school age musicians to play in an “All Star” Youth Orchestra under his direction. Under the AIM banner, John will travel extensively throughout regional and remote Australia seeing over 22,000 young musicians during 2019.