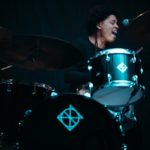 Phylshawn is a drummer, multi-instrumentalist, songwriter, recording engineer, session player, producer, and teacher.
Phylshawn has played drum set for over 30 years. Growing up in Kansas City MO, she learned to play at church and in school bands. In 2003 she relocated and attended community college in Columbia, MO. There she joined the local COMO music scene and by fall of 2006 completed her associates degree.  In 2007 Phylshawn enrolled into the University of Missouri School of Music. While at the university, she studied percussion with Dr. Julia Gaines and took private drum set lessons from Loyd Warden.  As a member of the University of Missouri Concert Jazz Band, she performed with Plas Johnson, Matt Wilson, Dave Pietro, Rufus Reid, Andy Narell, Ron Dziubla, and The Jim Widner Big Band. Phylshawn also played drums on UMCJB albums “Vertigo” with Mike Mainieri and “Tunnel Vision” with Bobby Watson and Mike Metheny.
In fall 2009, Phylshawn performed at the Lincoln Center Institute in an all female Nina Simone Tribute ensemble. In 2010, she performed at the 72nd annual MMEA conference with the Missouri All-Collegiate Jazz Band under the direction of Ronald Carter. Summer of 2010, she was invited by Rufus Reid to study jazz at Ravinia’s Steans Institute for young artists.
Active in the Columbia, MO music scene and community, Phylshawn teaches drum set lessons at Access Percussion, teaches drumline at Fulton High School, and is Chair of music non-profit, Compass Inc.
Phylshawn plays drums for Violet and the Undercurrents. While a member of the band, she has toured to over 20 states and released 4 albums.