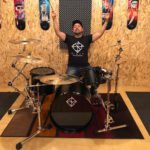 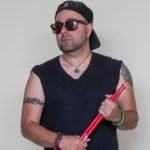 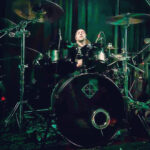 I started playing the drums in 1998 but ever since I have memory I always wanted a drumset. I come from a family of musicians, my mother was a singer  and my uncles had a bolero trio. As a kid I remember sitting for hours to watch them rehearse while imaginating how the percussions would sound in their music. I got my first real drumset when I was  20 years old and used to play in the garage with my brother who played  the guitar covering The Cure songs.

In January of 2012, I got called from the famous local band Viernes Verde, already with 18 years of history, and became an official member; three months later I was recording a new album in Miami (Namaste, Castle recording Studios). During the next years, I spent a lot of time touring until the next album when we travelled to Colombia ( P.M. Handshake Music Studios, 2016). That led to the big opportunity to sign a contract with the largest brewery company in Central America to become part of their music catalogue performing in big festivals all around the country. In 2017 we travelled to Mexico City to record a new album “La Ruta” which resulted at being invited to perfom in the biggest music festival in Latin America (VIVE LATINO , 2018). Later that year we returned to Mexico to produce and record our latest album “Trinidad” released on March 2019. During this period I founded a sideproject of reggae music ( Gud Yeye, 2017).

At the present day I am very grateful for what I have achieved during the years and becoming part of the DIXON family is a dream come true, now I feel very hopeful for the years to come.