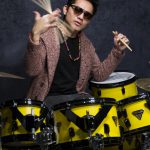 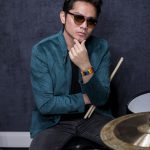 Saddler Samayoa, was born and raised in Guatemala.

He fell in love with music at the age of 13 as he grew up in church playing drums.

His passion for music was so significant that it became his second nature as he found himself studying music for 4 to 6 hours a day.

Saddler studied at the best contemporary music school of Guatemala: Poliritmos (Polyrhythms) with professor Byron Campo as his mentor for 4 years.

In his second year, because of his efforts and love for drums, Saddler obtained an “Outstanding Student of the Year” diploma. During his third year, while studying at the educational institution he also was asked to work at the Music School.

He worked in the music school and also with some famous Guatemalan and international artists as well as playing at one of the biggest churches in Latin America in front of 12,150 members. Even though he performed for several Rock concerts, Jazz Festivals and more, his desires and eagerness to improve his skills were great and did not stop him from continue studying.

In 2011, Saddler decides to apply for the most prestigious schools in the world of music and the entertainment industry: “Los Angeles Music Academy” (LAMA), located in California, to pursue his dream. His skills with different rhythms, reading, technique, independence, execution and improvisation in different styles were recognized; he was awarded with the “Outstanding Scholarship” and became the first Guatemalan and one of the few Latin Americans to qualify to the Award.

During his time at LAMA, Saddler studied Jazz with Frank Zappa former drummer Ralph Humphrey, Legendary Joe Porcaro (Father of Jeff Porcaro), Tony Inzalaco, Mike Packer , and Dave Bayer. among others. After graduating with honors and earning his degree in “Music Performance” he continued playing in many churches and bands around the States, (California, Nevada, Atlanta, Boston, Las Vegas, Philadelphia ). He was also invited to play with Hector Hermosillo, one of the greatest guitar players in Latin America, whom was also one of the guitarist and music director for one of the most famous artist and Grammy winner, Luis Miguel.

In 2013, 2014, and 2015, Saddler was invited to play with Flamenco Guitarists Russ Hewitt and Alfredo Caceres at the National Association of Music Merchants (NAMM) Show. The NAMM show is known as the world’s largest trade-only event for the music products industry in Anaheim California. In 2015, Saddler performed with Alex Skolnick (Testament) at Godin Guitars and surprisedly after performing, the company’s owner Robert Godin, gave him an Electric Djembe because of his outstanding performance.

Saddler was also invited for a tour with “Twenty7″, a band based in Los Angeles, they traveled in around almost 10 cities over in the United States. The tour was successful, and they performed in different venues in Los Angeles; Saddler decides to join the band afterwards.

In December of 2015 the band released their first song in Turkish “Muhtemel ask” which positioned them as one of the top 5 songs in Turkey and winning several awards from the media such as “Band of the Year”, “Song of the year” “Stars of the year” and received as well as 4 music awards from prestigious Universities in Turkey. The song has reached over 50 Million views on Youtube and was used for a famous TV series in the Country. The band changed the name from “Twenty7” to “Yirmi7” which is basically the translation of the number twenty-seven (27) in Turkish. Yirmi7 has been featured in different magazines such as Cosmopolitan, GQ, and Esquire; and their music also became available to be listened on every plane by Turkish Airline.

Since 2016 the band has been touring all over Turkey and Europe, having SOLD OUT shows in Germany and gaining tremendous recognition and acclamation from the fans. The same year they released their second single “SokakLambasi” reaching out over 10 million views on Youtube and the song was also used for a TV show in Turkey. The band is now recording their full album in Istanbul Turkey to be released in 2018 and some of the songs are going to be recorded between Los Angeles and Istanbul.

Saddler is also an educator and writer; In 2017 he started his online drum school project which that is going to be launched in 2018 in different languages.

Since 2016, Saddler has been sharing educative drum-videos that have been featured on different websites and world’s biggest Facebook drum-community page, “Drum Talk” with over 1 million followers. “DrumTalk” Furthermore, Saddler has been collaborating with different artists from Spain, Brazil, and India. His large engagement online has made one of his videos go viral in India and an Indian guitar player ShyluRavindran, invited him to be part of his upcoming album.

Currently, Saddler is recording with his band Yirmi7 in Istanbul, Turkey at the same time Recording with artists from Latin America, India, and Europe.