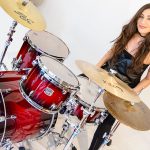 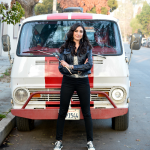 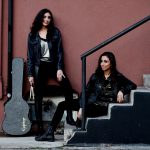 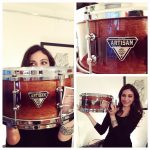 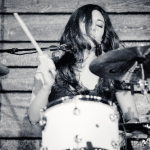 Stephanie is a drummer, singer, songwriter, and co-founder of award-winning rock duo Deer Park Avenue with her sister Sarah.

Stephanie started on drums at the age of seven, after announcing to her family one day that she wanted to play drums like Ringo Starr. Soon after, Stephanie got her first drum lesson from cousin Gregg Bissonette who taught her and Sarah to play the Beatles song “Eight Days a Week” for family and friends.

Stephanie has studied with drum and percussioninstructors in California, New York, Switzerland, and Germany. She holds two Honours Diplomas from the London School of Journalism. Growing up with a family who loved all kinds of music, her influences span a variety of styles and bands from the Beach Boys to Bollywood, the Who, the Foo Fighters, Blink-182, WirsindHelden, Hillsong, and many more.

Deer Park Avenue was the winner of the Hard Rock Rising (Washington, D.C.) battle of the bands. They have been nominated in many independent music awards and have been played on radio and online radio in the U.S. and overseas. Deer Park Avenue have toured the U.S. and Europe, playing in clubs, festivals, churches, and schools. Strong advocates of music education, Stephanie and Sarah are also music teachers and have spoken and performed at schools across California and Switzerland.They are both members of the Recording Academy (GRAMMYs).