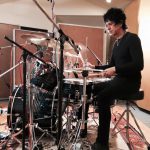 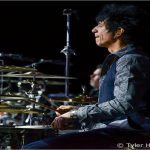 Tony Pia began playing drums in his native Detroit, and was influenced by the city’s rich musical history and culture.  He played in orchestral, jazz and rock bands as early as high school, and began professionally touring shortly after graduating.  Since then Tony has toured with world renowned bands such as the Brian Setzer Orchestra, David Lee Roth and Spinal Tap.  Tony will be touring with the Doobie Brothers in 2015.