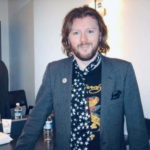 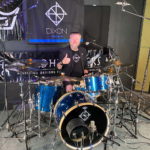 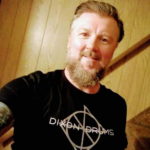 With 35-plus years in the industry, his track record speaks for itself. After having sat behind the kit and playing drums for artists such as Helix, Ace Frehley, The Four Horsemen, Dee Snider (Twisted Sister) and Lita Ford, Archie maintains he continues to be incredibly fortunate in getting to do what he loves for a living.

He’s even had the chance to tour with some of his heroes — KISS, Alice Cooper, Vince Neil, Paul Rodgers, and Robert Plant — as well as some cool younger bands like Sum 41, Airbourne, KAOS, The Trews, Finger 11 and more.
Archie became part of the Helix family back in 1997, replacing the much-loved Greg ‘Fritz’ Heinz, as an already-seasoned road veteran formerly of the Attic/Universal records band The Buffalo Brothers, and was pumped for the task. In fact, Gamble had stood in the front row on the band’s Wild in the Streets tour as a young fan, with stars in his own eyes, cheering for his rock heroes.

To go from audience to the stage was a giant leap in his musical progression.
Over seven years playing with Helix, Archie also road managed the band from 2000-2004, as well as helped out as a press/management liaison. While making contact with Much Music resulted in an appearance episode on The Power Hour, other TV appearances soon followed — as well as a fruitful relationship with the cast of Trailer Park Boys. Archie has also made appearances on The Conan O’Brien Show, MTV and more.

Collectively, Gamble appeared on one indie album with Helix and two Capitol/EMI Greatest Hits releases, as well as the 30th Anniversary live DVD, filmed at Brantford’s Sanderson Centre. Since then, Archie has maintained a busy calendar of live and studio work, as well endorsement deals with Dixon drums (he plays the prestigious Artisan Series) Sabian cymbals (since 1994) Remo heads and Headhunters sticks.

Most recently, Archie has been involved in national session work and sideman gigs, as well as co-producing and playing on an album by Aaron Allen + The Small City Saints (who has gone on to be a Top 10 charting artist at country radio and featured as Apple’s Artist of the Month).

As a working musician, Archie says he’s continually grateful for all of the wonderful opportunities his career has brought, including-and in particular his work with Helix, something he continues to be greatly proud of. He has two Gold records on his wall from his years of hard work.