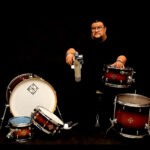 WHO IS TATO?
Guatemalan, he began his studies with the Cuban master David Garcia; later he entered the academy STACCATO MUSIC with master Gamaliel Mayen where he studied for 5 years.

After a few years he had the opportunity to study with great Guatemalan drummers such as Fernando Martin, Manuel Ruano, Leonel Franco and Jose Lopez.

He is currently studying a certified in Technique, endorsed by Los Angeles College of Music, with Master Saddler Samayoa.

WHY DIXON?
Dixon is an optimal sound, harmony and beauty in its craftsmanship, and above all is designed and built to showcase the skills and abilities of a drummer who wishes to leave his art and passion in the instrument.

For this reason, for me, Dixon is the ideal choice that will not only enrich my sound, but also give versatility for the different genres in which I work, such as: pop, iazz, funk, latin and especially for studio sessions, where I am convinced that Dixon will stand out while playing among many artists with whom I work with.

I am delighted with the sound of the “Artisan” series, but I’ve also had the chance to use it on different occasions due to it’s versatility both in the studio and live. as it provides a great sound and consistency. The “Little Roomer” seems to me to be an incredible drum set for it’s compact size, jazz playing and the versatility for acoustic performances. Both drums are a dream for me, they bring to my groove everything a drummer needs. I have found great sounds in the different snares, I would love to show them here in Guatemala either playing live or in the studio. It would be such pleasure for me to be part of the Dixon family.