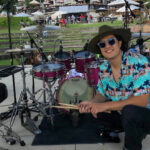 Drummer since 2005 and member of various groups; I have participated with different Guatemalan and international artists and musicians such as: Casa de Kello, Kontra Danny Marin, El Clubo, Tita Moreno, Cynthia Fion, Rodrigo Zarco, Matea Santa, Somni, Aire Guru, OneWiza, among others. I also have participated in different record productions as a session drummer and with my own bands. Currently, I have recorded more than 40 songs by different artists.

Award for Revelation Band 2017 with Casa de Kello at the Estela Awards.

Award for Best Record Production 2017 for our album “Tercera Guerra Mundial” at the Estela Awards.

Drum Clinics inside the country by Aquarian Drum Heads with the support of Canaan Music. Drum lessons for children and adults.

Drummer of Symphonic Concerts by the Guatemalan Orchestra System

Winners of Battle of the Bands in the Olympic Festival of Guatemala with my band Solemne Sicodelia.

Winners of the Battle of the Free Press Bands Guatemala with my band Solemne Sicodelia.